ABOUT DSL:
David Scott Lynn and
The Dynamics of Social Law

A Brief and an In-Depth History & Biography of David Scott Lynn and His Personal Approach to Politics, Economics, Law & Social Evolution

“At Bottom, the Politics of “The Collective” are an Aggregate* Expression of the Individual Decisions & Choices We All Make. — Here in this Website are Expressed  MY Decisions, MY Choices & MYActions.”

David Scott Lynn (DSL) was born & raised in the South Suburbs of Chicago.

He began his “whole health” studies at 13 years old in Martial Arts & ZEN-style Meditation. He continues to study various perspectives on the science of mind, spiritual & religious studies, and alternative (natural) health modalities.

After graduating from high school, DSL became a Structural Ironworker (heavy steel construction), becoming a foreman by 18 years of age. This is in great part because he started going out to the job sites with his Father, John A. Lynn, at around 13 years of age on weekends, holidays, and summers. This was, of course, against Union Rules because of David’s age, but John Lynn was a bit of a Rebel At Heart as well.

Yet David’s construction education from his Father about how to “think structurally” and work with physical reality contributed immensely to David’s later development of DSL Edgework, a system of Myo-Structural Bodywork, Mindful Medical Massage & Myo-Structural Yoga Therapy.

YOGA: The Quality of Attention one pays to whatever they are doing.

This approach has little to do with the Eastern Indian methods of yoga or meditation and is diametrically opposed to any “religious” aspects of “yoga” as taught by the Eastern Gurus or mystics.

This approach to thinking and being was foundational to David becoming a Conservative-leaning, Radical* Libertarian and Pro-Constitutional American Republic. (Which is very interesting because Joel Kramer had become a pretty far-left progressive.)

* RADICAL: to the root of things

David became a yoga teacher at 22 years of age, and a professional bodyworker (muscle therapist) at 27 years of age.

In between, he had for a few years been very involved in the financial markets, being a partner in a Technical Analysis Service on the floor of the Chicago Mercantile Exchange for private market-makers. Rubbing shoulders with the movers & shakers on the trading floors is where he learned a LOT about how the markets, economics, and politics REALLY work.

He was told he was a budding genius in the field of technical market analysis.

Yet with so much corruption in the financial markets, he decided to go into Whole Health Therapeutics as his career. In 1981, however, he began writing articles and teaching seminars on the New World Order, anti-Communism, anti-Medical Monopoly, and so on.

This was foreshadowed by the fact that at 16 years of age, in a high school communications class, he wrote a paper titled “Dick & Jane is a Communist Plot.”

David did some writing for the Heartland Institute, a Free Market Think Tank based in the Chicago area. He authored the chapter on the pros and cons of Professional Licensure for their economics book Out Of The Ice. 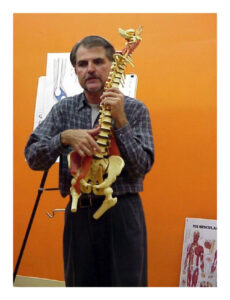 In the 1990s, David traveled across the country teaching his method of therapy to bodyworkers and yoga teachers.

TOPICS on this Site

Knowing the U.S. & State Constitutions is your PRIMARY "KNOWLEDGE TOOL" for stating your case to your Fellow Citizens and your Politicians & Bureacrats who are running your State. ...

Knowing WHO YOU REALLY ARE in the Great Poltical Structure of America and The States is critical to Regaining & Maintaining the Rights, Liberties, Freedoms, & Pursuits of Property & Prosperity in America and the Several States.

The Constitution is the Solution-JBS

JBS is probably the Oldest & Most Effective organization committed to exposing the communo-fascist conspiracy and the New World Order, Technocratic Globalism behind, controlling, and finacing the front-line of Neo-Marxist, communo-fascists. ... JBS produces VERY highly educational materials, and has many tools for Taking Action, and coordinating activities with like-minded patriots.

For those living in Arizona, AZ Free is a highly effective organization providing up-to-date information and giving you well-constructed tools to quickly, easily, and effectively send your feedback to Arizona State Legislators.

This is the Group that produced the highly successful and accurate Documentary 2000mules which proved just ONE of many aspects of how corrupt the 2020 Election was, and how to prevent future elections from being corrupted.